4 Ways to Protect Your Retail Business Against Network Outages

Black Friday. Your customers are merrily going about their business and selecting hundreds upon thousands of crucial purchases that are essential to keeping your company in the black for the rest of the year.

But something goes wrong.

There’s a credit card malfunction and transactions can no longer be processed. Customers grow frustrated. They stop buying online and they walk out of your stores. Complaints pour in on Twitter. You triage the situation and quickly get systems working again, but the damage is done. You’re forced to issue a statement in the hopes of restoring trust in your brand:

“We highly value our customers and sincerely apologize for any inconvenience today’s system slowdown may have caused during their shopping experience.”

Yikes. Nightmare scenario, yes? But it actually happened. This year. And to the retail conglomerate Macy’s, no less.

Truth is, the Macy’s outage may seem like it occurred during the worst moment imaginable, but when you rely on digital consumer communications, every outage—be it an Internet failure, a credit card systems breakdown or a POS software problem—comes at the worst moment imaginable. With Ponemon Institute reports indicating that a sobering 59% of businesses have suffered a loss of customers due to system outages, and with estimated costs of unplanned network interruptions hitting a whopping $15 million per incident (in the case of larger organizations), no retail business can afford an Internet or digital systems failure, let alone withstand the loss of reputation that may arise as a result.

But there’s good news: Retailers can now keep a host of backup options on standby. These days, a network outage doesn’t have to spell disaster for your business. Instead, you can reorganize your infrastructure so that a systems failure barely registers on anyone’s radar—keeping customers happy and restoring your peace of mind.

Read on for a few pointers on how to fortify your retail organization against downtime damage and maintain smooth, seamless operations, even in when your network refuses to cooperate.

1.Take things off the grid

Remember the P.F. Chang’s China Bistro credit card breach of 2014 that threatened the company’s 204 locations across 39 U.S. states? No? Well, P.F. Chang’s does. And while a breach is vastly different from an outage in terms of its implications for business-to-consumer relationships, there’s occasional overlap in potential solutions to both problems. If you’re concerned about any of the uncertainties that accompany digital POS systems (downtimes, security hacks, etc.), you may want to take a page from P.F. Chang’s book and sidestep electronic transactions altogether.

At the time of P.F. Chang’s breach, the popular chain decided to shift to a manual POS system in order to be 100% sure its customers’ credit card numbers weren’t let loose on the information superhighway. The company reverted to credit card carbon copy machines—hand-operated, offline devices nicknamed “knuckle busters” that imprint customer credit card info onto a piece of carbon paper for processing at a later date. No buttons, no wires and no hacking risks. It’s an easy fix if you’re a brick-and-mortar operation and you’re worried about sensitive information being overtaken by an uninvited third party, or if you need a backup in the event of a good old-fashioned system crash.

But “easy” is a relative term. While carbon copy machines may be a simple solution in the sense that they’re a logical option and are easy to store, they do require some added work. If you opt to go off the grid entirely, those credit card numbers will have to be transferred into someone else’s hands if you ever want to get paid—and the standards that govern PCI security for these kinds of transfers are both rigorous and exacting. Alternatively, if you choose to employ copy machines as backup terminals in the event of normal POS interruptions, you’ll still have to find a way to enter all of the copied data into your electronic system once things are up and running again. Keep both the pros and cons in mind when deciding if these machines are right for you.

2. Invest in POS software with an offline mode

Obviously, if your primary business is in ecommerce, a system that runs entirely offline is out of the question. If this is the case (or if you simply prefer the streamlined services and sleek inventory tracking features that a web-based system can provide), there’s a helpful alternative available if you’re looking to safeguard your company against outages: a digital POS solution with offline capabilities.

Today’s market offers a large selection of POS software with “offline modes” that keep things moving along behind the scenes should there be any breakdown in communication between you and your ecommerce servers. ERPLY, for example, comes equipped with an offline functionality that caches all transaction data in your browser during downtimes, so that effectively no customer information is lost and operations can resume without a hitch once you’re back online. Take note, though: Not all offline modes or offline POS systems are created equal. While ERPLY provides comprehensive offline coverage, certain competing software solutions might offer fewer functions during an outage. Decide which operations are essential to you and be sure those operations will be available in offline mode before choosing a POS with offline capability.

Another way to take Internet outages off the table is to install a cell-network-based 4G service for all your digital connection needs. These types of network providers can run parallel to your traditional fixed line broadband services and can likewise be programmed to take over the heavy lifting if your Internet won’t perform, allowing your POS software to continue working without any holdup. In fact, 4G LTE modems are becoming so popular they’re considered a “preferred option” for certain entrepreneurs and are threatening to outclass broadband altogether.

In a recent PC World article, David Robles, marketing manager for NETGEAR’s Australian and New Zealand branch, indicated the 4G LTE modem was fast becoming the Australian connectivity method of choice. “We’re seeing more and more Australians opting for mobile modems,” Robles said, adding: “With cheaper data and growing allowances, many are choosing [cellular-based modems]…over a fixed line connection.” The implication being? No one will judge you for ditching broadband and going cellular, but you may want to use both in order to give yourself a safety net.

4. Have spare payment terminals on hand

When you’re dealing in face-to-face sales, sometimes an outage can be an issue of hardware rather than software. Frustrating as it is, tactile items can always break or fall apart. Be sure to have extra terminal equipment on hand in case a POS device suffers from a physical glitch like water damage (hey, spills happen), overuse or complete annihilation. If one piece of hardware goes down for the count, another device can step in and save the day. If you’re using Erply, you can create a new register in just a few minutes using an iPad or Android tablet.

Similarly, if there’s an outage that only affects one type of physical terminal, the other type will have your back. Fighting an electric brownout that’s left your normal POS stations under the weather? No problem. Use your mobile phone terminals and their respective network to process your sales. Phone network misbehaving? Fire up those time-honored cash registers and scanners instead. The more variety you employ in your POS systems, the less likely you’ll be stuck when something goes awry.

Note, though, that some systems are safer than others. Fixed lines are usually more secure and reliable than cellular-based terminals (different from cellular-based modems), according to a Business News Daily interview with Jared Isaacman, CEO of Harbortouch, a POS system provider. Still, the same article conceded that the mixed bag approach to payment terminals can be a good thing: “Integrating mobile functionality into traditional POS systems and merchant operations is a value-added benefit that makes sense in many merchant environments,” Rick Caldarella of Veracity Payment Solutions observed.

As with any business venture, do your due diligence and be sure to read up on your chosen backup method. Don’t be afraid to ask a ton of questions before making your final selection. Also: Don’t be shy about using more than one of the above suggestions. Multiple contingency plans never hurt anyone—especially if you’re trying to avoid the fate of Macy’s, P.F. Chang’s and other similarly beleaguered enterprises.

Best of luck and happy holidays. Here’s to staying in the black. 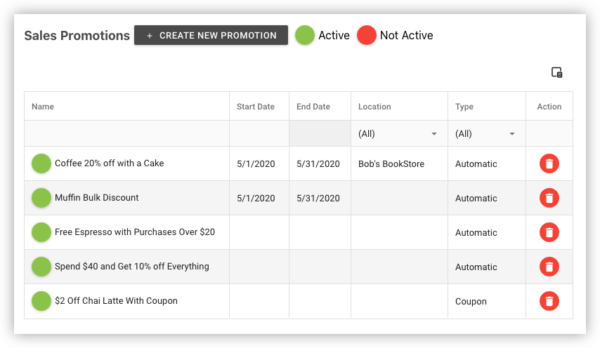